Here’s Everything You Need to Know About Holi, the Hindu Festival of Colors

With the throwing of colored powder and water balloons, Holi has become known as India’s most vivid, joyous festival. International travel groups selling tours to the country often place photos of boisterous Holi celebrations alongside pictures of the Taj Mahal.

Contents hide
1 What is Holi?
2 How is Holi celebrated?
3 Why has Holi become popular outside India?
4 Holi and religious tensions in India

Although the Hindu festival of colors finds its origins in South Asia, it has now gained popularity across the world, with Holi events organized across the U.S., the U.K. and elsewhere.

Here’s everything you need to know about Holi.

Holi has been celebrated in the Indian subcontinent for centuries, with poems documenting celebrations dating back to the 4th century CE. It marks the beginning of spring after a long winter, symbolic of the triumph of good over evil. It is celebrated in March, corresponding to the Hindu calendar month of Phalguna. In 2020, Holi begins March 10.

There are varying accounts of Holi’s origin mentioned in several works of ancient Indian literature. According to one popular version of the story, an evil king became so powerful that he forced his subjects to worship him as their god. But to the king’s ire, his son Prahlada continued to be an ardent devotee of the Hindu deity Lord Vishnu. The angry king plotted with his sister, Holika, to kill his son. Holika, who was immune to fire, tricked Prahlada to sit in a pyre with her. When the pyre was lit, the boy’s devotion to Lord Vishnu helped him walk away unscathed while Holika, from whom the festival derives its name, was burned to death despite her immunity.

How is Holi celebrated?

On the eve of the festival, large pyres are lit in many parts of India to signify the burning of evil spirits. People often throw wood, dried leaves and twigs into bonfires. 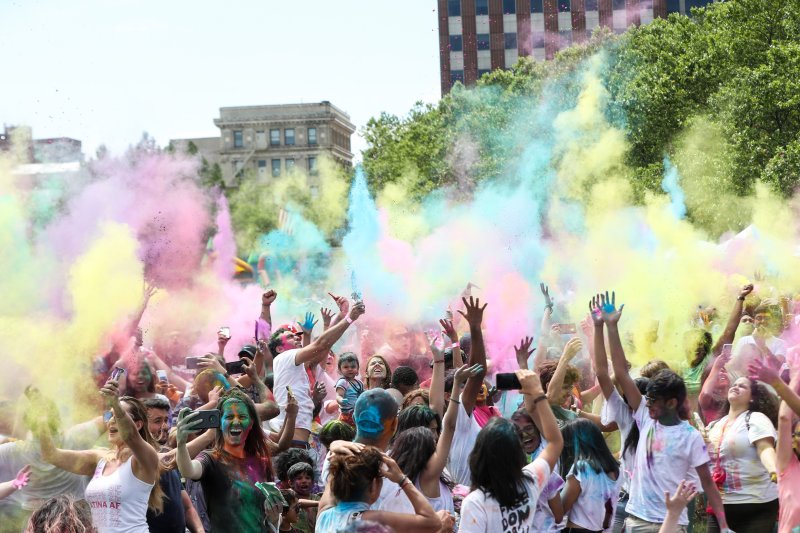 On the day of Holi, entire streets and towns turn red, green and yellow as people throw colored powder into the air and splash them on others. Each color carries a meaning. Red, for example, symbolizes love and fertility while green stands for new beginnings. People also splash water on each other in celebration. Water guns are used to squirt water, while balloons filled with colored water are also flung from rooftops. Later in the day, families gather together for festive meals. It is also common to distribute sweets among neighbors and friends.

Why has Holi become popular outside India?

Holi has become increasingly popular outside of India — in large part because of the millions of Indians and other South Asians living all over the world. As with Diwali, another Indian festival, communities with South Asian heritage living abroad often get together to celebrate Holi.

“We want the future generation to be connected to the culture back home,” says Minal Jaiswal, who moved to London from Mumbai in 2003. Jaiswal organizes a not-for-profit Holi event every year for London’s South Asian community, which features dance performances and short plays on the story behind Holi. “Celebrating as a community helps parents show their children what this festival stands for.”

However, some commercial Holi events have faced criticism of cultural appropriation. Many have complained about the gimmicky nature of some events and “color marathons” organized in the U.S. and Europe. Critics accuse organizers of co-opting the famous colored powder used in Holi, while ignoring the religious significance of the festival and turning it into just another raucous party. 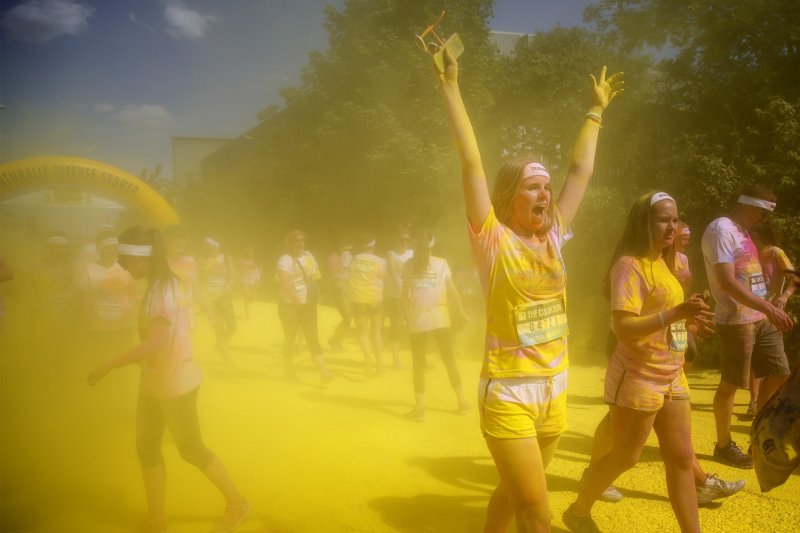 “There has been a commodification and exotification of Holi,” says Shana Sippy, assistant professor of religion at Centre College in Danville, Kentucky. “It has been freely used as a money-making enterprise.”

But some argue that widening the appeal of Holi is good for cultural understanding. Caru Das, who organizes Holi festivals in the U.S., dismisses charges of cultural appropriation and says celebrations are instrumental in bringing people of different cultures together.

“In the current climate of deteriorating politics and divisiveness around the world, this is a breath of fresh air in comparison to all the name calling and hate exploding around us,” says Das, who is a follower of Hinduism, but does not have South Asian heritage.

Holi and religious tensions in India

Despite having roots in Hinduism, Holi has been celebrated across all religious communities in India. It is not uncommon to see Hindus and Muslims open up their homes to each other for religious festivities.

This year’s Holi festivities come in the wake of mounting religious tensions and some of the worst religious violence India has seen in years. A controversial citizenship law invoked by Prime Minister Narendra Modi’s government has triggered nationwide protests and deadly clashes across the country.

As a festival, Holi has always been about breaking boundaries. While it is often seen as a colorful festival, Sippy, the religion professor, says it “has often involved much more violent forms of letting loose.” She points to past incidents of sexual assault and harassment during Holi celebrations.

“Even though Holi can be a wonderful, celebratory spring festival, it is now just one reason for the vulnerable to feel terrified,” she adds. “We are already seeing whole new levels of horrific communal violence in India and there isn’t any space for letting loose at this moment.”

NBA live stream 2020: how to watch every playoff game online from anywhere